I spent a few hours on Saturday at "West Coast Falconry", company in the foothills above Marysville, CA. The event was a photo class sponsored by MIke's Camera, and cosponsored by Tamron Lens. Our host was Kate Marden, Master Falconer and the owner of West Coast Falconry, a professional falconry school. I had no idea what to expect but saw it as an opportunity to hone my skills as a birder/photographer. We started right away with short introductions, broke our group into two groups and I left with the group taking a Harris Hawk out for it's morning workout and feeding. That Harris hawk is called Xxxxx, 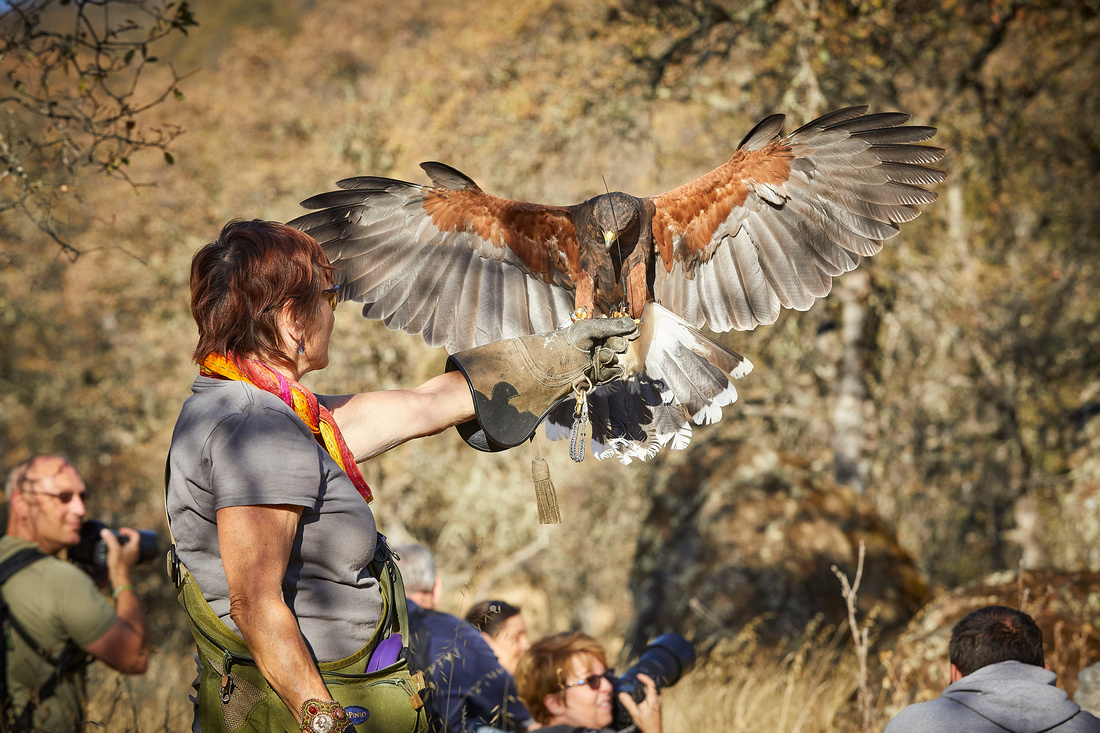 I was immediately surprised by how little the attention the bird paid to the 9 photographers trying to capture images of it. Kate would send it off to a nearby tree or rock and then call it back to her hand with some treats. It would swoop so low one of our photographer almost hit it as he panned to keep the bird in his viewfinder. 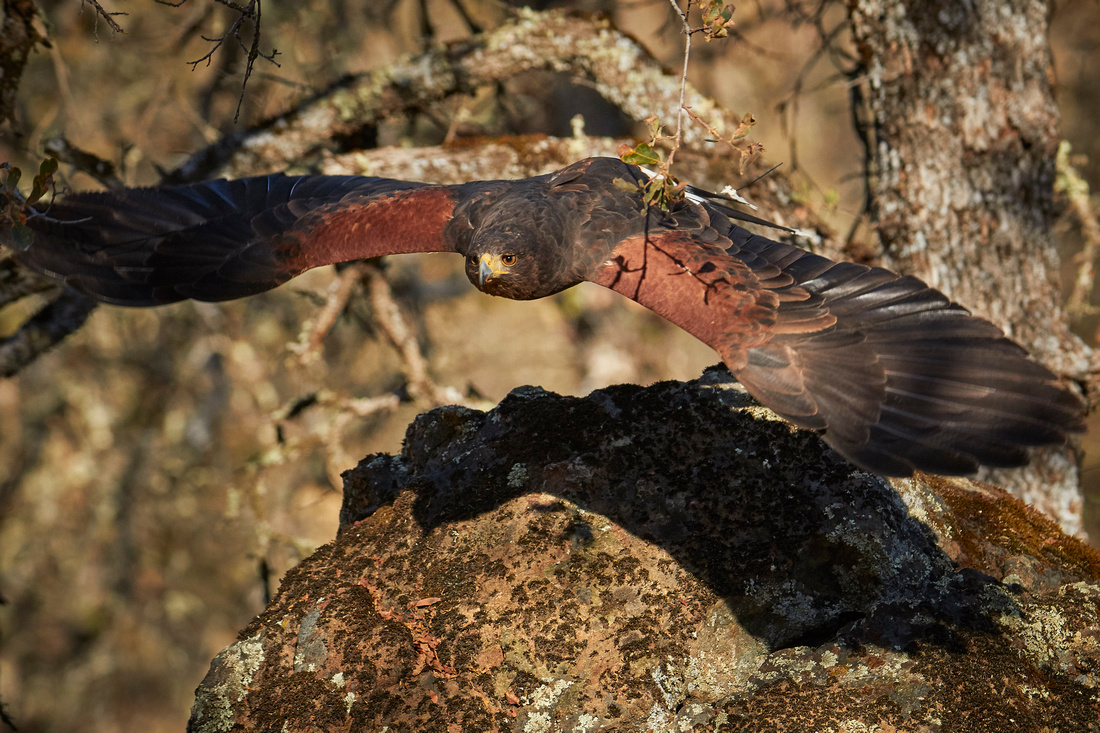 Leaping off his perch on a rock, Xxxx would swoop right over our heads gliding back to Kate's waiting glove and treat. Click, click click go the shutters of all our cameras. We were all mesmerized by the opportunity to work so closely with such beautiful raptors. It is rarely possible to get such intimate photos in the wild. 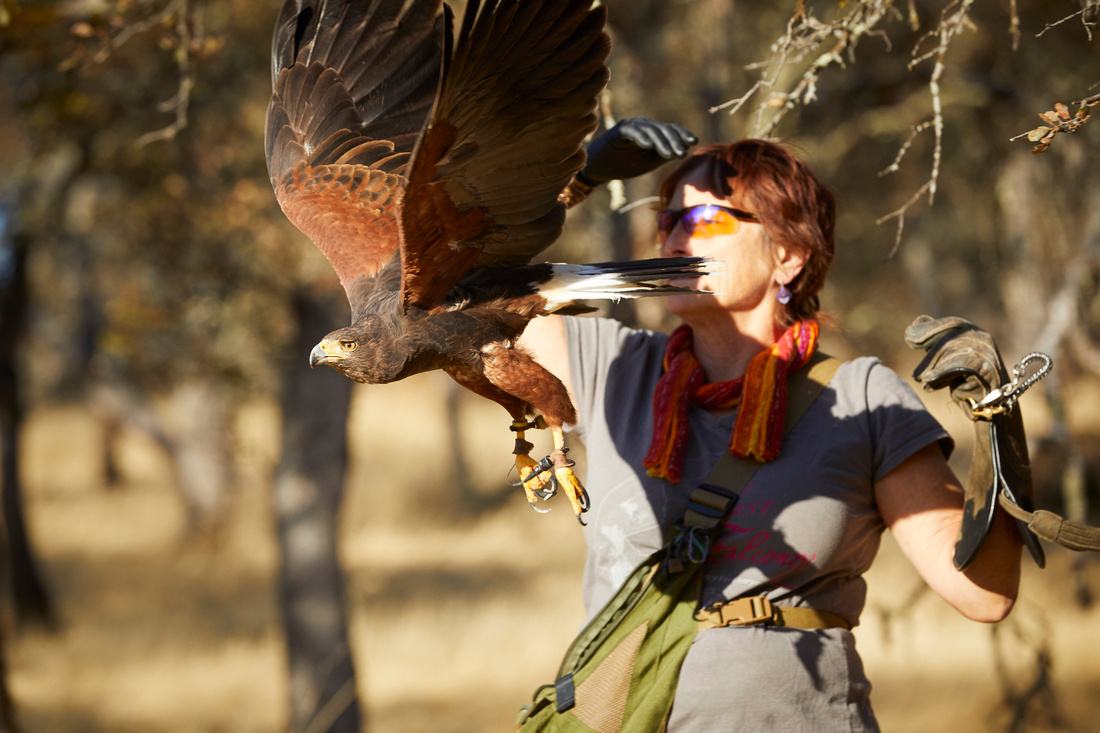 I caught several great shots of the Harris Hawk as he tried to catch his treats in the air. 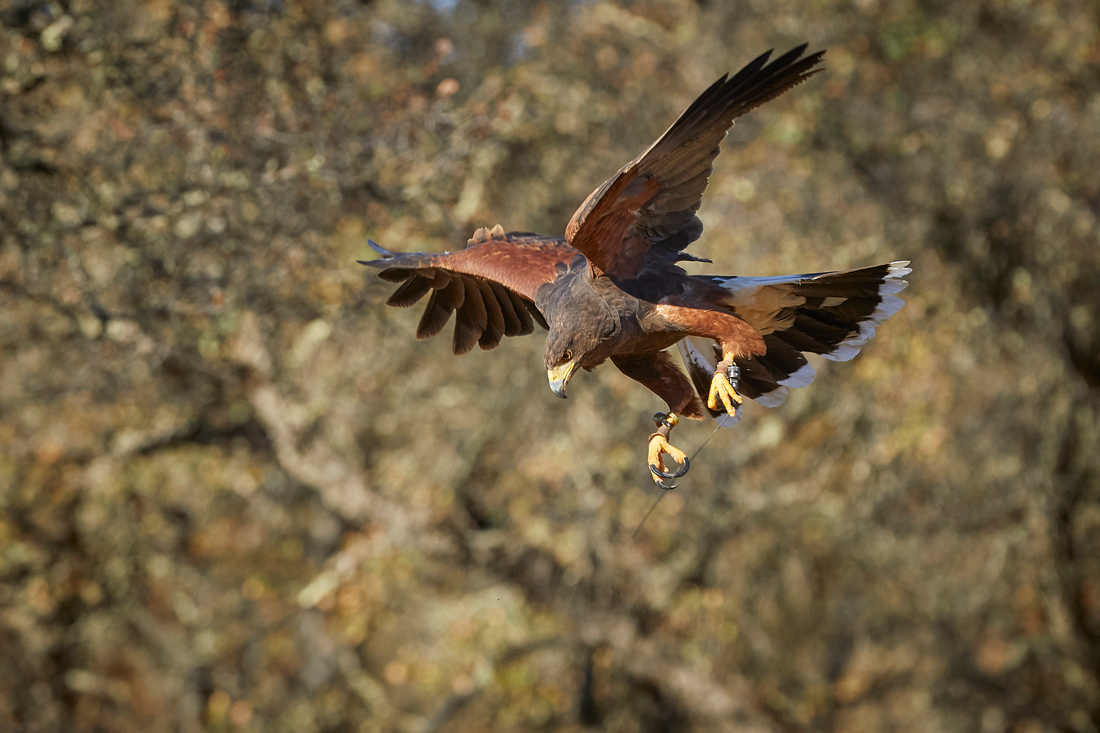 We spent about an hour with the Harris Hawk and worked him pretty well till he was "fed up", what falconer say when their bird's have eaten their fill and are no longer interested in doing anything for you. We walk him back to his roost where Kate keeps about twenty raptors each tethered to his own roost in a large fenced in area.

We then got to move out to the front lawn area where we got a chance to meet many of the other birds, either just on the glove or as they fly back and forth between two trainers or into a tree waiting to be offered a treat. 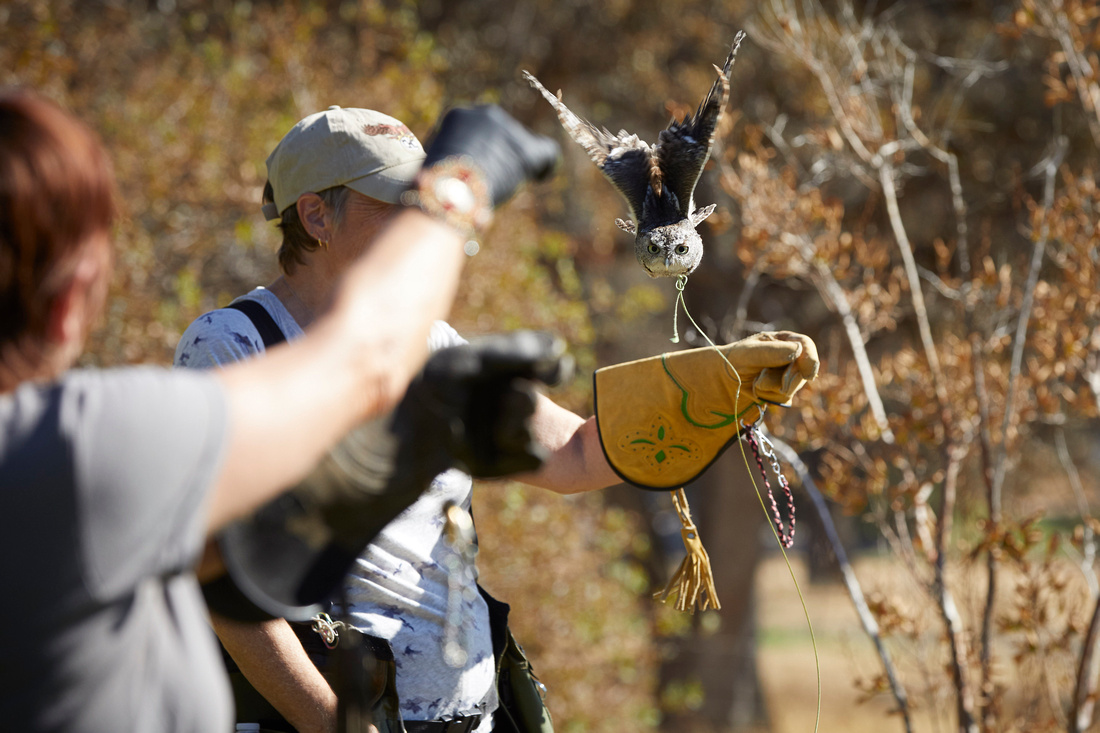 Falconry 869This cute little guy is a squelch owl and was the most talkative of all the raptors we saw this day.

This Screech Owl is fully grown, and only reluctantly fly or blast from trainer to trainer. We got lots of shots of him running back and forth on top of a saw horse pouncing on his treats with both claws extended. 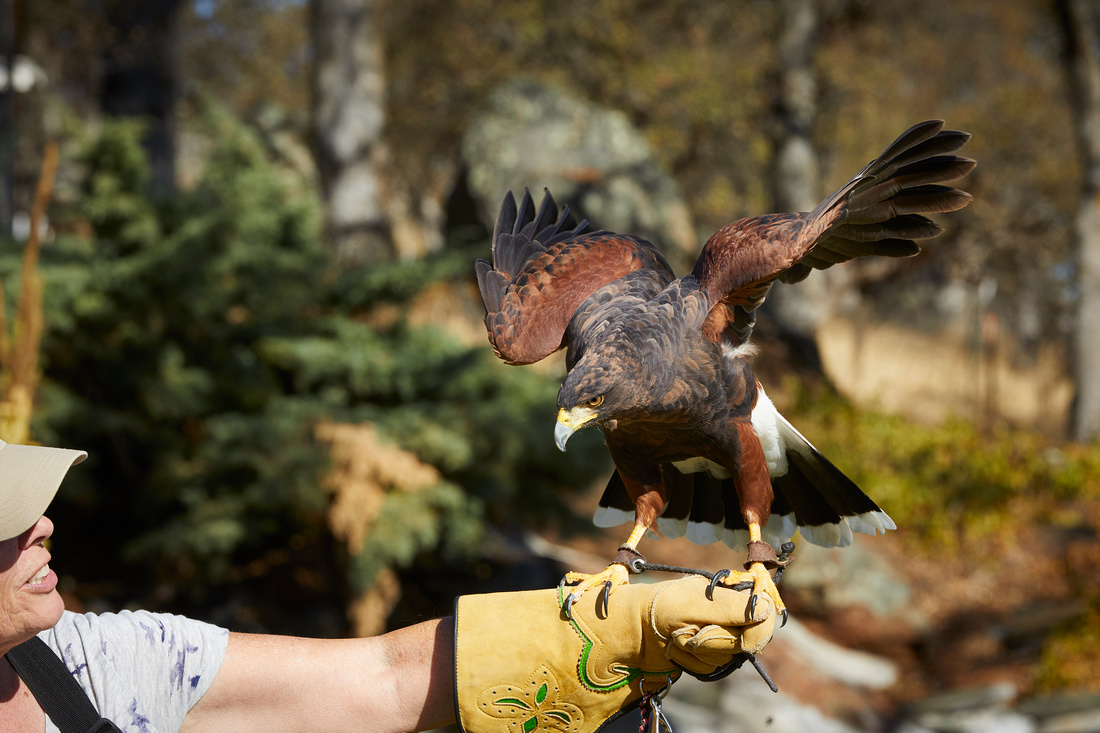 This second Harris Hawk (Bob) seemed like he wanted his turn up the hill. 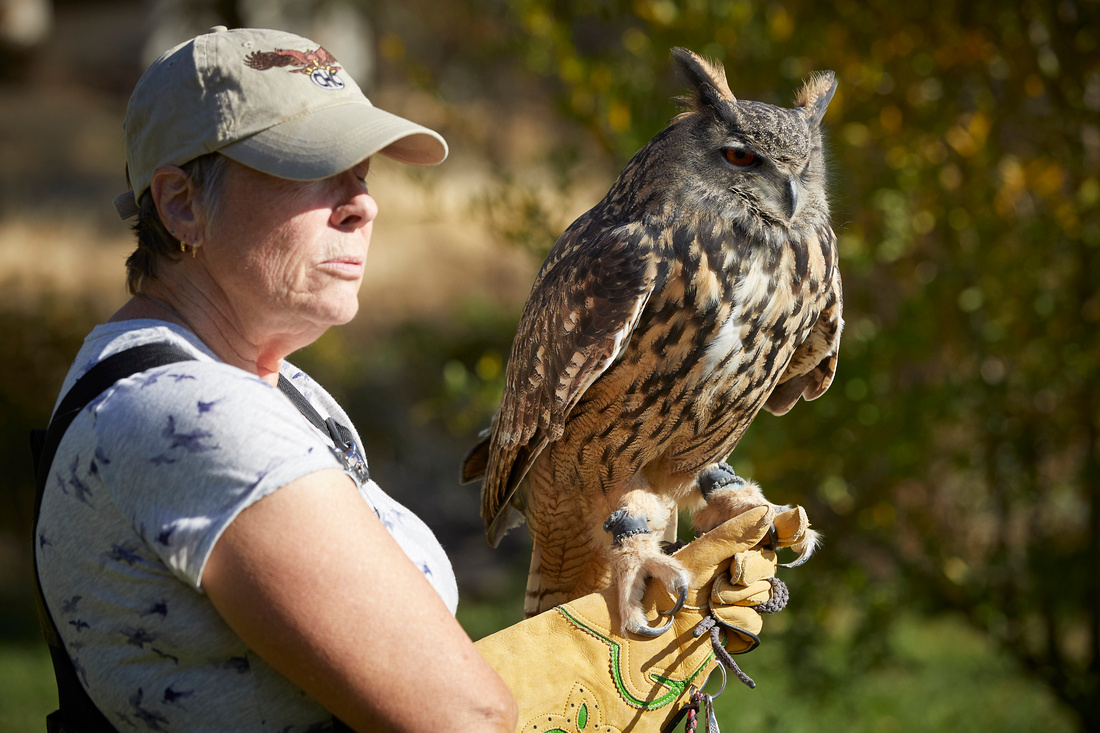 Kate's associate -( name ) shows off ( Name ) a Eurasian Eagle Owl. This is the same species that was used as Harry's Owl in the Harry Potter movies. Many of the other birds flew across the lawn or posed for portraits, either way the photographers kept snapping away. I would much rathe spend my time silently wandering along the banks of the American River, trying to find the perfect wildlife photograph, but at the end of all this editing I have to admit, this was a great photography experience, I learned a lot about some beautiful birds and I got to take some photographs that I could never get in any other way.  Thank you West Coast Falconry, Kate Marden and staff. Also Louis at Mike's Camera for putting the class together. And here is my parting shot. A closeup of this magnificent owl. 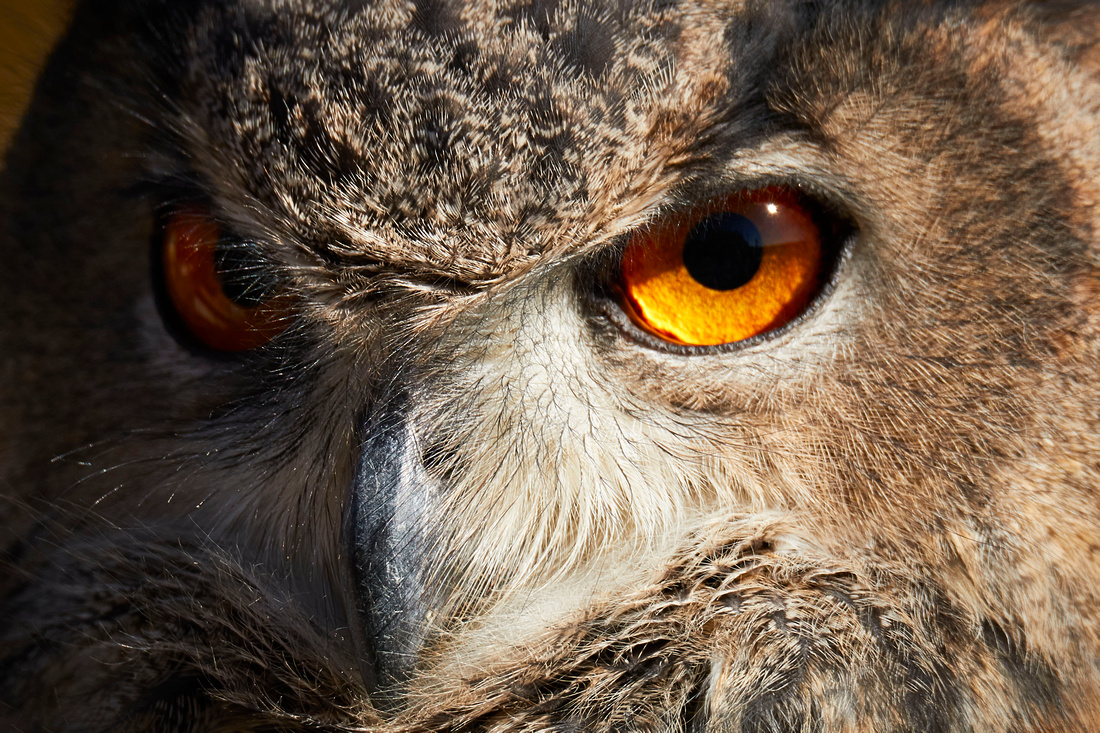